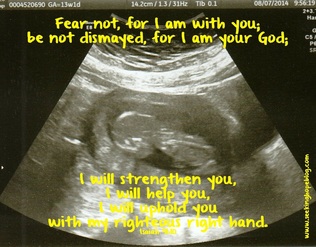 August 6, 2014 – On my 36th birthday I was thirteen weeks pregnant and had an early morning appointment with the obstetrician. It was my second prenatal appointment. I had never made it to a second “normal” prenatal appointment with my previous pregnancies, so I didn’t know what to expect. My weight and blood pressure was checked and the requisite questions were asked before I was taken to an exam room. A few minutes later a nurse came in the room with a fetal doppler to listen for the baby’s heartbeat. We had heard that glorious sound less than a week earlier at the NT scan. After squirting out what seemed to be a ridiculous amount of gel, she placed the probe on my belly and began moving it around searching for the heartbeat. Nothing. She moved the probe. Still nothing. After what seemed like an eternity of her rubbing that probe all over my belly there was no heartbeat found. The nurse left the room and the doctor entered a few minutes later. She tried to find the heartbeat for about five minutes and still nothing. She wanted me to have an ultrasound so I went back to the waiting room while the nurse checked the schedule. They couldn’t fit me in until later in the afternoon. We had our repeat NT scan scheduled for the following morning so I told the nurse I would just wait until then. She handed me the paper to give the lady at the checkout desk. It had a post-it note attached – NO HEARTBEAT.

I didn’t wait around for the scan that day because it was my birthday. If my baby had died, I didn’t want August 6 to be the day I found out. Then that day would no longer be my birthday. Instead it would forever be the day I found out my baby died. There are dates from my previous pregnancies that I’ll never forget – May 4 (the day we first knew there was a problem), May 7 (the day we received our fatal prenatal diagnosis), May 10 (the day we got a second opinion scan with Dr. P), May 18 (the day my baby died), June 20 (the day my second baby died).

I spent the remainder of my 36th birthday praying that August 7 would not be remembered as the day I found out my third baby died. Keith was great. He reminded me that they couldn’t find the heartbeat on the doppler

at about the same point in my first pregnancy but found it on the ultrasound. That reassured me a little bit.

The next morning, August 7, we repeated the NT scan. We had an awesome ultrasound tech. As we were walking back to the room, I explained to her what happened the day before. She immediately found the heartbeat and let us hear it. She talked to us during the entire scan and explained everything she was seeing.  We had three more scans with the Maternal-Fetal Medicine specialists and I requested her every time. Unfortunately she was only there to do our final scan.

I believe that God placed her on my path that day. He knew that she was the tech that I needed to help calm the anxieties that had built up during the twenty-four hours prior to that scan. Once again, He showed me that I didn’t have to be afraid.