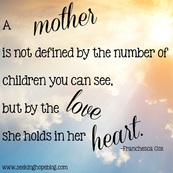 A little after Samuel was born, someone made a comment that I would get to celebrate my first Mother’s Day this year. While it was an innocent comment not meant to hurt me, it was simply untrue. This year I will experience my fourth Mother’s Day. I don’t say celebrate, because the first three weren’t exactly celebrations.

My first Mother’s Day was on May 13, 2012. This fell six days after we learned our baby would not live and five days before our baby went to Heaven. I’m pretty sure I was in shock by this point and don’t remember anything about that day.

My second Mother’s Day was on May 12, 2013. I was in the middle of preparing myself for the one-year anniversary of our loss and waiting to see if our first IUI was successful (it wasn’t).

My third Mother’s Day was on May 11, 2014. By this time I was grieving the loss of two babies, I had just learned that our fourth IUI in six months did not work and I had no idea of my job situation for the coming year. I had planned to hide from civilization that day. I was succeeding until my Mama showed up at my house that afternoon with a flower. A few others acknowledged my motherhood on this day, but not many.

Samuel is my first living child, but he didn’t make me a mother. The second I conceived my first child I became a mother. The fact that I never got to hold that child didn’t take that title away. Mothering children that you can not hold is a very difficult thing to do. But we do it. Every single day we do it. We talk to them. We dream of what they would have been like. We remember them. We ache for them. We love them.

This is a question that was asked many times during my pregnancy and continues to be asked now that Samuel is here. It is a very difficult question to answer, mainly because of the reaction people give when I give the honest answer. It just has the potential to get awkward.

﻿﻿Samuel is my third child. I have two babies in Heaven. ﻿﻿

Many people do not know how to react to that answer. I get it. No one wants to think about death, especially the death of a child. So sometimes it is easier to just say yes and move along. And every time I do that, every time I don’t acknowledge my other children, I feel an extreme amount of guilt.

Mother’s Day has been a tough day for me over the past few years. In fact, the entire month of May just stinks. Yes, this year may be a little easier in some ways because Samuel is here, but in other ways it will still be tough. I’m still missing my babies. I’m still smack in the middle of the anniversary of the worst period of my life. I’m still a grieving mother.

Mother’s Day is hard for the bereaved mother, especially if she has no living children. If someone in your life is a bereaved mother, take a minute to remember her on Sunday. Send her a card. Give her a call. Acknowledge her motherhood. I promise you won’t be making her sad, bringing up painful memories (those are with us every day anyway) or hurting her. You will be showing her that you care and that you remember and it will make the day a little easier.