All of my scans through 24 weeks were conducted at the office of the Maternal-Fetal Medicine specialists. This is the same office where we received the bad news about our first baby. It was not always easy to go in for these scans since that place had the potential to trigger memories of that horrible day. We were not assigned a specific doctor. After the scans, a doctor would look at the scan and, depending on that doctor’s preference, may or may not have seen us. We had not seen a doctor after the two NT scans. The doctor who was there on those days just looked at the scans and told the tech that we could leave.

We were scheduled to have an early anatomy scan when I was 16 weeks pregnant. This was a little over three weeks after “the birthday scare” and our second NT scan. I was my usual anxious self for a few days leading up to the scan. As we got started, things seemed to be going well. The tech was talking to us and explaining what we were seeing on the screen. As the scan progressed, she got quieter and quieter. This started to make me feel a little anxious. Then she started asking me about health problems and past pregnancies, which left me feeling a little more anxious. A few minutes later she stopped the scan, told us that she was going to show the doctor and that he might want to repeat the scan. As she walked out of the room I was in full panic mode.

What did she see that caused her to get so quiet?
Why was she asking about past pregnancies?
Why was the doctor going to come in and repeat the scan?
What was wrong with my baby?????

My outward appearance must have mirrored how I was feeling inside, because as soon as the doctor entered the room he asked me what was wrong. I explained how nervous and anxious those scans made me feel. He immediately explained that nothing alarming was found on the scan and that he liked to repeat all of the scans himself. He repeated the scan and told us that they were not able to see some things because it was still early, but what they were able to see looked good. Then he captured this image: 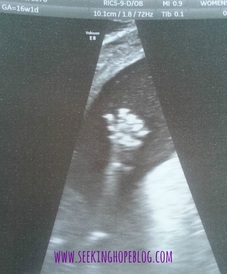 I saw this little “thumbs up” from the womb as a signal from the baby and from God that everything was okay in there. I made this picture the wallpaper on my phone so that every time I used my phone I saw that little thumb. I would look at it when I was feeling anxious and remind myself of God’s message – you don’t have to be afraid.

And the doctor that day – his name was Dr. Joy. In the 11 1/2 weeks that I knew I was pregnant, I had been fighting to find joy in the pregnancy. By capturing this image, Dr. Joy brought me a little bit of joy that day and every time I looked at that picture. I don’t think it’s a coincidence that he was the doctor who saw me that day. God orchestrated that, just as He orchestrated little Samuel sticking up his thumb at the exact moment the doctor was doing the scan. I think it was His way of telling me that it was okay to choose joy over fear. I certainly left the office that day with a little more joy in my heart and a sense of peace that everything was okay.