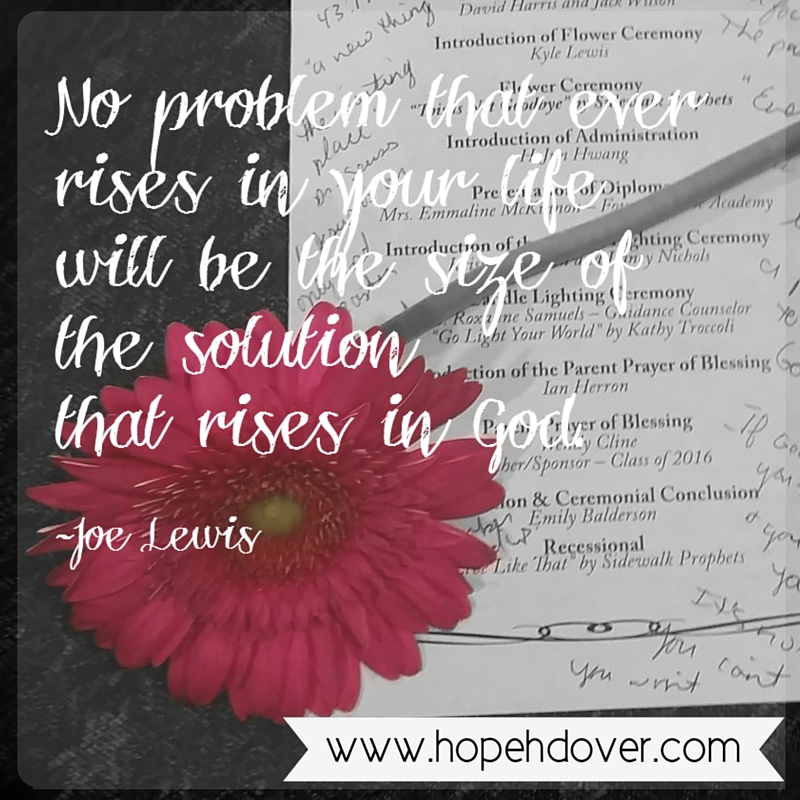 I entered the sanctuary of the church that was hosting my niece’s high school graduation ceremony Saturday morning unaware that we were going to HAVE church that morning. I was expecting the typical graduation ceremony. You know – the welcome, the salutatorian and valedictorian speeches, the awarding of the diplomas, maybe a video montage. But as the guest speaker (a pastor) got started, I was prompted to pick up a pen and take some notes on my program.

This guy was not only speaking to the graduates, everything he said could be applicable to every person in that room. There were so many good things said and so many sweet nuggets of wisdom written down. I really wish I could just post a recording of everything he said. It was that good. One thing that he said really caused me to reflect on the past four years of my life. 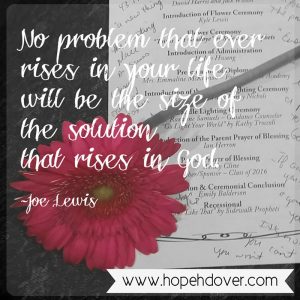 Looking back at what God has brought me through over the past four years proves this point. Four years ago began a series of some fairly big problems in my life – baby loss, grief, infertility. They were big for me. Sometimes so huge, so overwhelming that I didn’t think I would ever get through it. There was deep grief over the loss of two babies. There were countless fertility treatments and month after month of negative pregnancy tests. There were so many sleepless nights wondering what purpose there could possibly be for all of this pain. There was a pregnancy riddled with so much anxiety that I didn’t even believe we were going to be bringing a baby home until we actually brought that baby home. These were big problems for me, but thankfully, they were not too big for God.

This truth has gotten me through many difficult days. This truth kept me from staying curled up in a fetal position in my bed on those days. This truth gave me the push I needed to keep going. And I am so glad that I kept going because life has become so sweet. I know I will still face trials and tribulations. That’s life. When those problems arise, I can look back at what I have overcome and remember that God is bigger and His plan is perfect.

What problems are you facing today? Do you believe that God is bigger? Do you trust in His perfect plan? These verses got me through some tough times. I hope they will do the same for you.

Until next time, keep hoping! 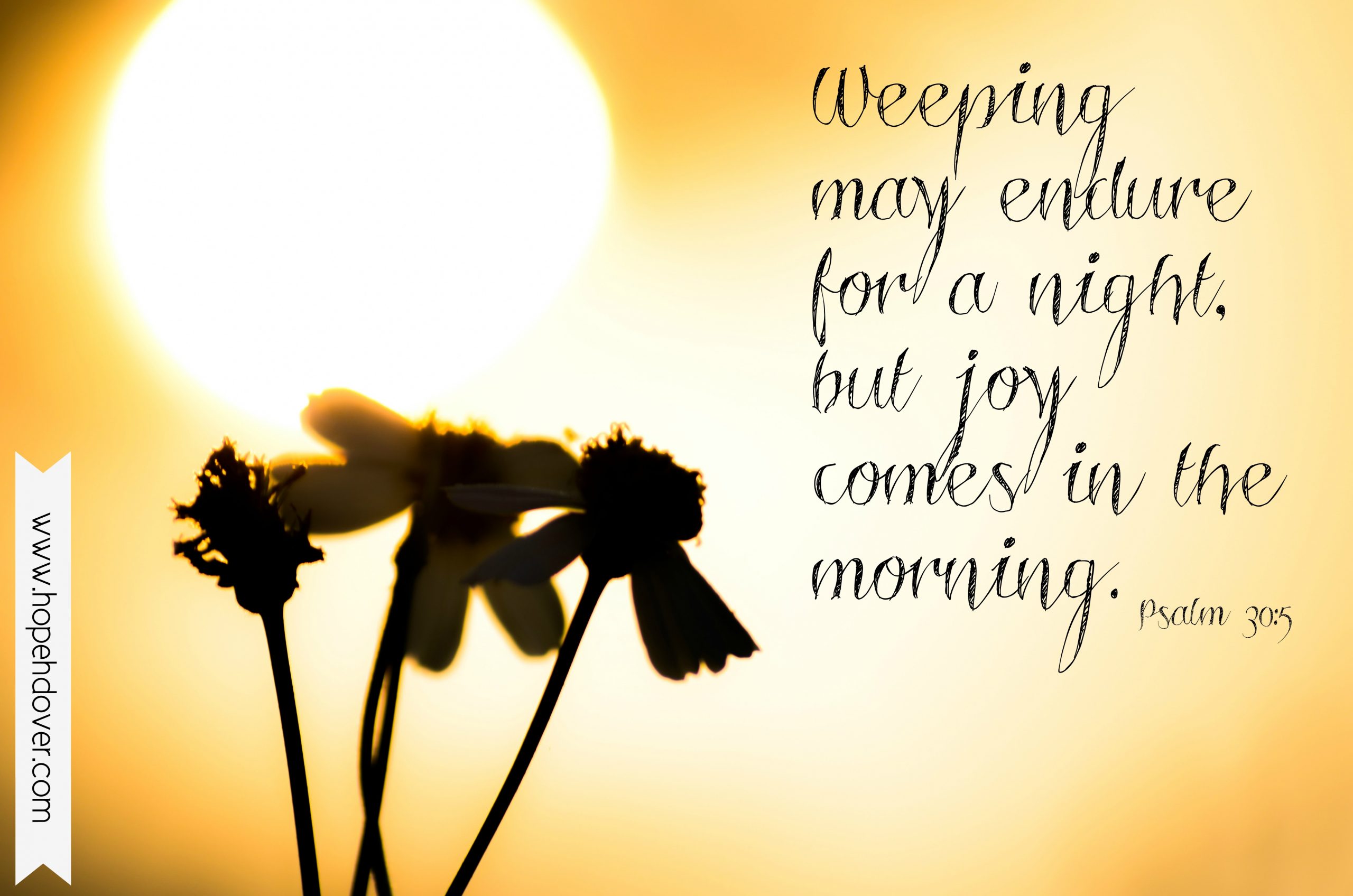 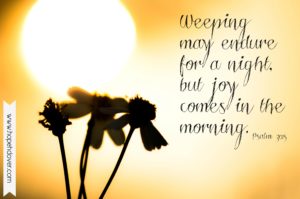 Memories of pulling over on the side of the road on the way to the hospital because I was sick. Waiting in the hospital waiting room with tears streaming down my face. The sandpaper-like texture of the tissues they gave me as I waited to be rolled back to the operating room. Worrying that my husband had not had anything to eat all day. Crying as they wheeled me into the operating room. Waking up and telling the nurse in the recovery room that my heart hurt.

This year on May 18th, four years later, I’ll be wheeled into the operating room again; only for a much different reason. The thing I’ve fought so hard to preserve all these years (my fertility) will be taken away. I’m having a hysterectomy. It is my best shot at eliminating the pain caused by endometriosis, rather than merely managing the pain for the rest of my life. It is my choice and I know it is the right thing to do. I have two beautiful children and they are my main reason for doing this sooner rather than later. I need to be fully present for them, and I can’t do that if I’m in chronic pain. That doesn’t mean it’s easy.

When the nurse called with my surgery date, I hesitated for a minute. In my head I was thinking, “May 18th is the day my baby died. I don’t think I have room for anything else on that day. Plus, I’m supposed to go to the dentist.” But I went ahead and told her that was okay because it would probably be another month if I didn’t. There are so many emotions wrapped up in this day, in this surgery. But this year, I have decided that I am redefining May 18th. Yes, it will always be the day my baby died. But now it will also be the day that freed me from the physical pain that has tortured me since adolescence.

I’ll never forget the events of May 18, 2012. Why would I want to forget? It’s the day that changed me. Forgetting would mean not acknowledging the precious life that made me a mother. I’ll never forget, but maybe one day this day won’t sucker punch me like it always seems to do. Maybe. Or maybe it will always be hard. That will be okay too. Because looking back at those dark times lets me see how far I’ve come and how joyful the morning really is.

Until next time, keep hoping!

April 20-26 is National Infertility Awareness Week. Infertility is a disease, just like cancer or diabetes or (insert your disease of choice here). It is recognized as a disease by The World Health Organization, the American Society for Reproductive Medicine and the American College of Obstetricians and Gynecologists. The disease of infertility results in abnormal functioning of the male or female reproductive system and is defined as the inability to conceive or the inability to carry to term with a live birth. This disease plagues one in eight couples of childbearing age.  This disease plagues me. 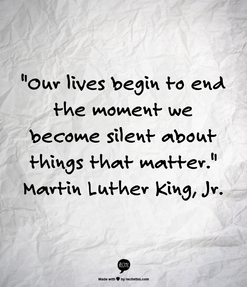 The reality is that there are no perfect words to help someone understand what it’s like. The only true understanding can come from those who have walked this path.
Living with infertility consumes you. Life is lived two weeks at a time – two weeks leading up to the “baby making” activities (or treatments/procedures) and two weeks waiting to see whether or not it worked. Not a day goes by without thinking about it, dreaming about a baby. I know each month when my due date will be if I conceive.

Living with infertility causes all privacy to go out the window. Every aspect of your menstrual cycle and sex life is revealed to doctors and nurses. You are poked and prodded more times than you ever thought possible (usually very early in the morning). One of the dumbest things someone can say is, “At least you’re having fun trying.” Newsflash – there is nothing fun about being told by a nurse over the phone when to “do the deed.” And it is not very romantic when foreplay consists of your husband giving you a shot in the belly. In my case, the drugs make me feel so bloated (it actually feels like my ovaries are going to pop) that sex during this time is not the most comfortable experience. Bottom line, when you have to work at getting pregnant, sex is not fun anymore, for either partner.

Living with infertility teaches you that words can help and words can hurt. (I could write an entire post about this one.) Don’t tell us to relax, as if relaxing will suddenly cure us. Don’t tell us to just adopt and then we’ll probably get pregnant. Don’t question our desire to have children or offer us one of yours. What you can do is listen, be there when we need you (and give us space when we don’t) and ask us what we need.

Living with infertility evokes a gamut of emotions. During the course of any given month, I feel devastated, defeated, angry, envious, frustrated, determined, tenacious, encouraged, anxious and hopeful, just to name a few. It certainly is a roller coaster ride.

Living with infertility changes you. I am not the same person I was nearly three years ago when we started this journey. I am stronger. I am more empathetic. I am more appreciative of life. I am learning to trust God’s plan. I have faith that one day I will conquer this.

One thing I will never be is silent. I want other women living with infertility to take comfort in knowing that they are not alone and they do not have to suffer in silence. I want those who have not had to experience this pain to get a glimpse of what it’s like and hopefully become more appreciative of what they have and more sensitive to others.